I've also started a new blog on my experiences with Google Glass. This one will continue, but I thought I'd a have a separate here for all things to do with wearable media: http://reflectionsonglassblog.wordpress.com/
Posted by Andrew McStay at 18:20 No comments:

Less about a search for the definition, my aim instead was to explore a variety ways that it might be conceived. Too often we use the word as if it had a stable meaning and that we all had a common sense of what the word refers to. If my conversations with students is anything to go by, we have quite different ways of thinking about the meaning of the word – not to mention different forms of privacy-related behaviour. So, in sum, this book is an exploration of privacy in relation to a range of philosophical world-views and the grounding of these with concrete media examples. Thanks go to Joe Turow, Mark Andrejevic, Jo Pierson and Clare Birchall for the generous reviews. Blurb and links to Chapter 1 and the appendix of "new theory" below. Do get in touch if you'd like me to come and give a talk.

Blurb:
What can philosophy tell us about privacy? Quite a lot as it turns out. With Privacy and Philosophy: New Media and Affective Protocol Andrew McStay draws on an array of philosophers to offer a refreshingly novel approach to privacy matters. Against the backdrop and scrutiny of Arendt, Aristotle, Bentham, Brentano, Deleuze, Engels, Heidegger, Hume, Husserl, James, Kant, Latour, Locke, Marx, Mill, Plato, Rorty, Ryle, Sartre, Skinner, Spinoza, Whitehead and Wittgenstein, among others, McStay advances a wealth of new ideas and terminology, from affective breaches to zombie media. Theorizing privacy as an affective principle of interaction between human and non-human actors, McStay progresses to make unique arguments on transparency, the publicness of subjectivity, our contemporary techno-social condition and the nature of empathic media in an age of intentional machines.
Reconstructing our most basic assumptions about privacy, this book is a must-read for theoreticians, empirical analysts, students, those contributing to policy and anyone interested in the steering philosophical ideas that inform their own orientation and thinking about privacy.

Feel free to share within your own networks.
Posted by Andrew McStay at 18:00 No comments:


I wrote another piece for The Conversation on Sky, Xbox and Verizon here. Asked to comment on the significance of behavioural advertising on television that utilises the room scanning potential of the Kinect, I linked this to ideas developed in my

forthcoming book Privacy and Philosophy: New Media and Affective Protocol. In the article, I highlight that these developments are getting very close to displaying qualities of empathy, a premise discussed in depth in the book.
Posted by Andrew McStay at 07:11 No comments:

The Conversation: Why too much privacy is bad for the economy


I wrote this opinion piece linked to for The Conversation. Reflecting on novel developments in outdoor advertising, Tesco and Alan Sugar's company Amscreen, it unpacks these in relation to the philosophy of Jeremy Bentham (without a panopticon in sight!). Hope you like it: story here.
Posted by Andrew McStay at 07:48 1 comment:

Review for Creativity and Advertising 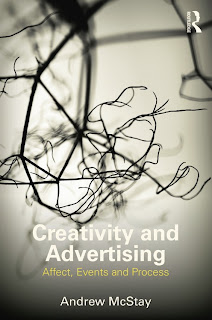 Reviews for Creativity and Advertising are starting to come in now, not least one from Stephanie O'Donohoe from the University of Edinburgh for the International Journal of Advertising. I've wondered how this book would be received by the more empirical and industry-focused journals, and I'm very glad to read that O'Donohoe has been very generous in her review (available to those with access to academic journals here). In the review she highlights my upfront warning to practitioners, and those seeking a generalist account of creativity that repeats industry lore and and dogma, that they will not be in for an easy ride (indeed, she likens the book to a theme park ride). Moreover, she might have questioned my theoretical resources for this book, not least as there are a number of canons from the creativity/advertising field I omitted (too few words, too much I wanted to say). Instead she remarks there 'are rich nutrients in this alien soil, but they are not easily absorbed or digested by readers grounded in advertising'. She also poetically characterises the book in terms of 'being stranded in alien, erudite territory with a few tantalising signposts pointing the way home'. She concludes by framing the book in terms of both elegance and density (those who know me may not be surprised by the latter!).
Posted by Andrew McStay at 09:36 1 comment: